DREAMERS OF THE DAY has OPENED!!!! 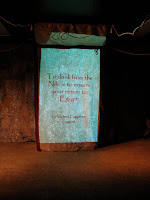 Dreamers of the Day
has officially opened for a limited run at Roy Arias Studios and Theatres at the Times Square Arts Center, 300 West 43rd Street, NYC.
Only 11 performances left!!!
Get tickets now at www.goingtotahitiproductions.com or
call 866-811-4111.
Posted by Going To Tahiti Productions at 2:46 PM No comments:

We're loading DREAMERS in to the Roy Arias Studios and Theatres even as we speak! There was a moment of panic this morning when we initially couldn't get into the theater but we're in now. Set construction is almost done. Sound cues are loaded, projections are getting worked out now. To get tickets for DREAMERS OF THE DAY, click here or go to www.goingtotahitiproductions.com.
Posted by Going To Tahiti Productions at 1:19 PM No comments:

So, somehow three weeks of rehearsal have flown by and we are now less than a week from opening night. The rehearsals are going very well and we can't wait for you to see what Agnes would call, "our little story."
Here are all the details:
DREAMERS OF THE DAY, a play based on the novel by Mary Doria Russell, is the story of one woman's accidental witness to history during the formation of the modern Middle East. 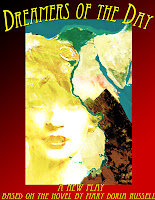 Egypt. 1921. Lawrence of Arabia. Winston Churchill. Woodrow Wilson...and Agnes Shanklin?
On the eve of the Cairo Peace Conference, a lonely American heiress finds herself the confidant of diplomats and the target of the attentions of a possible German spy. Part travelogue, part history, part journey of self-discovery, Kirkus Reviews calls the novel “an inspired fictional study of political folly.”
Five actors, Rhonda Harrington*, Kiwi Callahan, David Eiduks,* Adam Segaller*, and Maria Silverman* bring 70 characters to life in locations as varied as a Cleveland living room, a steamboat on the Nile, and a shadowy purgatory.
*denotes members of Actors' Equity Association

All tickets are $18.
Posted by Going To Tahiti Productions at 9:14 AM No comments:

Almost two weeks of rehearsal under our belts and the show is shaping up nicely. I don't really have much else to say except that I love my cast. They are gelling nicely with each other and the ensemble is just a fun talented group to be a part of. We have our first movement rehearsal on Sunday...Dana will be teaching the cast to ride camels. It should be great fun. The only thing I'm worried about is getting the camels into the rehearsal studio. :)
Posted by Going To Tahiti Productions at 11:34 PM No comments:

So the show has been cast and we have officially begun rehearsals!!!!

The full cast assembled today for the first time and we had our first Read Through. It went very well...though we didn't actually get through the whole script - clearly someone is going to need to cut another 20 pages...BUT, the reading went great!!! It was so exciting to hear Mary's beautiful words coming out of the mouths of actors instead of out of my mouth talking to my reflection in a mirror and trying to figure out if this show is going to work. Having heard actual actors, and really talented ones at that, actually start to play around with the characters and bring something of themselves to the show...it was thrilling...it was, it is- what I live for and, I can tell you now, this show is going to work...and this was only the first day!!! I can't wait to see what happens when we really start to play with the script, with movement, with tech and design elements. I'm hoping to post some cast info - headshots and bios on the website soon. Keep an eye out for updates. AND, I promise, I will try to update the blog regularly throughout this rehearsal process, but for now, I'm hitting the hay.
Posted by Going To Tahiti Productions at 11:18 PM No comments:

Only ONE DAY LEFT for Kickstarter donations!!

ONLY ONE DAY LEFT to be a part of the DREAMERS OF THE DAY on STAGE Kickstarter Campaign!! Thank you for helping us reach our goal, now help us blow past it like a semi truck passing a family station wagon on I-95 at 3am!!!

You can still be a part of the action, and as my 7 year old nephew says, "This is SO much ACTION!"

Click here for details and to donate:
Kickstarter: Dreamers of the Day on Stage

Posted by Going To Tahiti Productions at 12:00 PM No comments:

We've got a theater, we've got a crew, now let's get a cast, shall we?

Things are heating up...
The Showcase Application has been submitted to Equity and is pending approval.
The Theater has been booked!
DREAMERS OF THE DAY will open on September 16th at the Roy Arias Theatre Center at the Times Square Arts Center at 300 West 43rd Street. The show will run for 3 weeks until October 2nd. Details and ticket information will be posted as soon as it is available.
We're almost crewed up!
We've got ourselves a set designer, a stage manager, a sound designer, a choreographer and a projections designer. We're still waiting on word about a lighting designer, but, seeing as we're still 6 weeks out from opening night, I feel like we're in pretty good shape.
And now, we just need a cast!
Auditions will be held Monday and Tuesday. Depending on how the initial auditions go, we'll probably do call-backs next weekend. Currently we're on track for an August 15th rehearsal start date!
Posted by Going To Tahiti Productions at 11:49 AM No comments: